The farm is 1500 m above sea level and has an annual rainfall of 375mm. Due to its elevation and proximity to the Lootsberg mountain range, Blaauwater experiences harsh winters with frosty mornings and occasional snowfalls.

Justin and Liesl are the 4th generation of Kingwills on Blaauwater, where they farm with 4500 Merino sheep and 400 Bonsmara / Angus beef cattle. Blaauwater is ideally suited to the production of wool, mutton and beef and produces 20000 kgs of wool as well as 1800 lambs and 200 calves annually.

Besides running the guest houses and taking care of their two children, Liesl also maintains a small nursery on the farm that specialises in Standard Roses.

Be sure to pop in in October when they are in full bloom!

Records and documents from the past reveal that the farms Blaauwater and Tweefontein were requested in quitrent by Pieter Loots on 28 July 1814.

During the 18th century, the system of land tenure, known as ‘the loan place’ was instituted to enable the then government to exercise some control over the trekboers movements. By this system a burgher, having selected a particular farm, was permitted to occupy it under certain conditions, of which the main one was that he had to pay an annual quit-rent at the office of the nearest magistrate.

John Kingwill (1804-1849)and his family were from the village of Odcombe, Somerset, England. They arrived in Algoa Bay SA from England on the Royal Alice in August 1849. They established a home in Uitenhage and later moved to a farm near Aberdeen, before Alfred Kingwill (1844-1933) purchased the farm Houtconstant in the Graaff-Reinet district.

*Graham Sidney Kingwill (1882-1982) was one of 10 children born to Alfred & Charlotte. Grey (Graham) studied BA at he SA College in Cape Town and was placed first in his class in the Colony. He returned to his first love, the land and purchased a neighbouring farm, Request, in 1906. He acquired Tweefontein in 1934 and Blaauwater in 1947.

Grey & Mildred had two sons, Walter Graham (1915-1995) and Dennis Graham(1917-1997). Walter was educated at Grey High School, Rhodes University, played rugby for Eastern Province, was an army Colonel, farmer, and a Member of Parliament for 13 years. 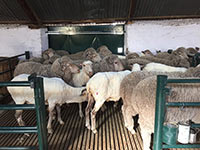 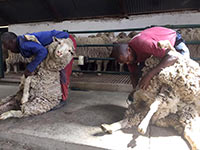